Wine tasting in Galicia…
I recently spent three days in Galicia in the north-west of Spain. We flew into Porto and then drove through the north of Portugal onwards into Galicia, heading for the town of Ourense where we stayed the first night. The plan was to visit three wineries, two in the DO Ribeiro and another in DO Rias Baixas, the heartland of crisp and refreshing Albarino wine.

Driving along we started to get a feel for the countryside, the rolling valleys and hills and the landscape was indeed quite green with trees and vegetation and quite unlike other hot and dry parts of Spain I’d visited like La Mancha or Andalucia.

We crossed over the Mino river which forms the border between Portugal and Spain. On the trip we stopped off for some views over the stunning Atlantic coastline and began to understand the importance of the river and the sea to the local micro-climate and to these exceptional “Atlantic Wines”

Our first stop was at Finca Vinoa and the vineyard setting was simply stunning. 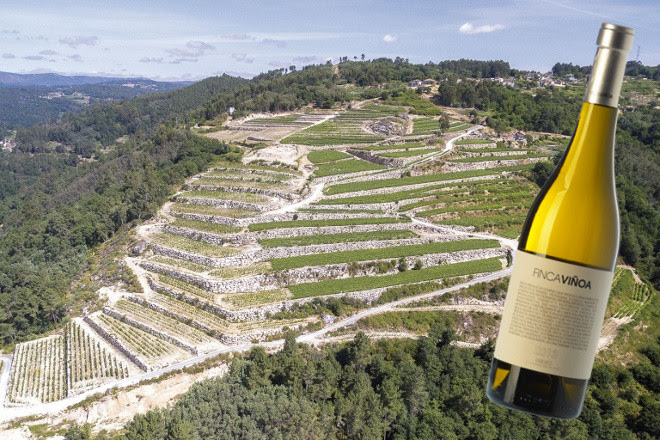 We walked the terraced vineyards, tasted grapes off the vines and then did some wine tasting outside with magnificent views of the vineyards and valley below. The Finca Vinoa 2017 white wine has won many prizes and accolades including an “Outstanding” rating and 95 points from Decanter magazine. Some of you will be familiar with this super wine as we have been selling it now for six months. The good news is that the 2018 vintage is really fantastic too! We tasted it alongside some lovely Galician tortilla which was a great match. The wine is a blend of four grapes Treixadura, Godello, Albarino and Loureira and is a gloriously complex glass of white wine. One lesson I learned on the trip is that 100% Albarino wines, although very good and very popular are really only the first step on the quality ladder. It’s the blends that are the more interesting and complex wines of the region. 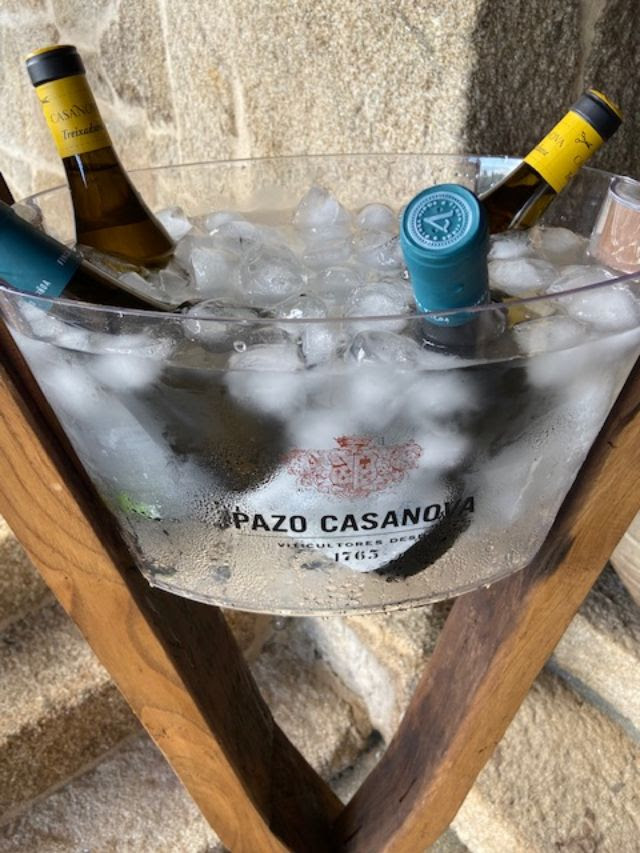 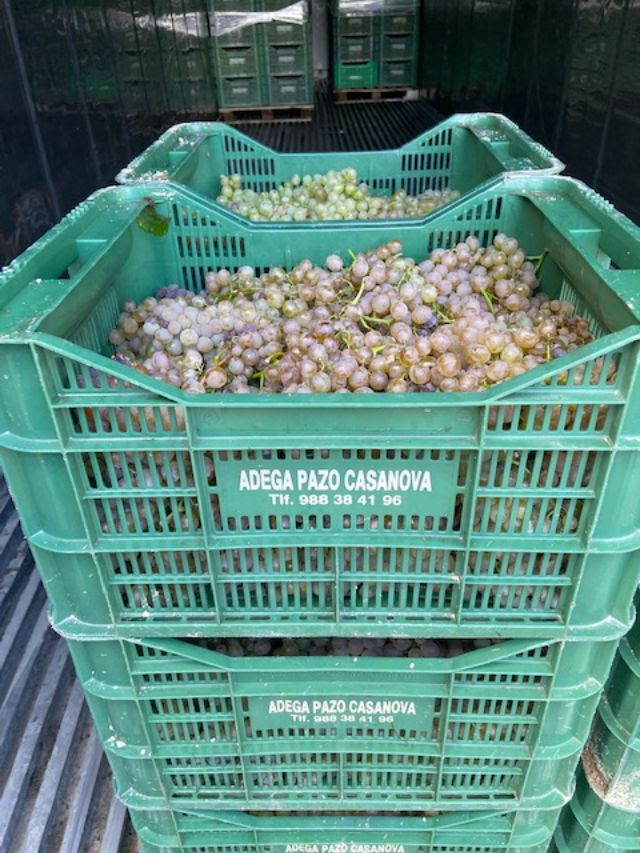 Next stop was Pazo Casanova, another brilliant Ribeiro winery. Here we saw some winemaking activities like how they refrigerate the freshly picked grapes in containers before sending them into the winery for pressing. Keeping the grapes cool is really important for whites to preserve the refreshing character and also to avoid oxidation. The winery was spotlessly clean and this is also really crucial for white winemaking. Here they specialise in the Treixadura grape(or TX as I like to call it, like PX for Pedro Ximenez) both varietal and in blends. The more complex wines are left ageing on the lees for various time periods from six months up to thirty months(lees are the sediment that forms over time in the bottom of the fermentation vat) and this technique of leaving the fermenting juice on it’s lees brings more complex flavours and character to the finished wine. We tasted fresh and delicious grape juice that had just been pressed in the Vaslin Press. After tasting through the range of wines in a studious and comparative format we were then treated to an exceptional lunch with views over the vineyard. This was when the wines really showed well and came into their own, tasted along with some local Galician specialities, the jamon, cheese and crusty bread and then the “pulpo” octopus with paprika. True gastronomic wines that sing brilliantly with food. 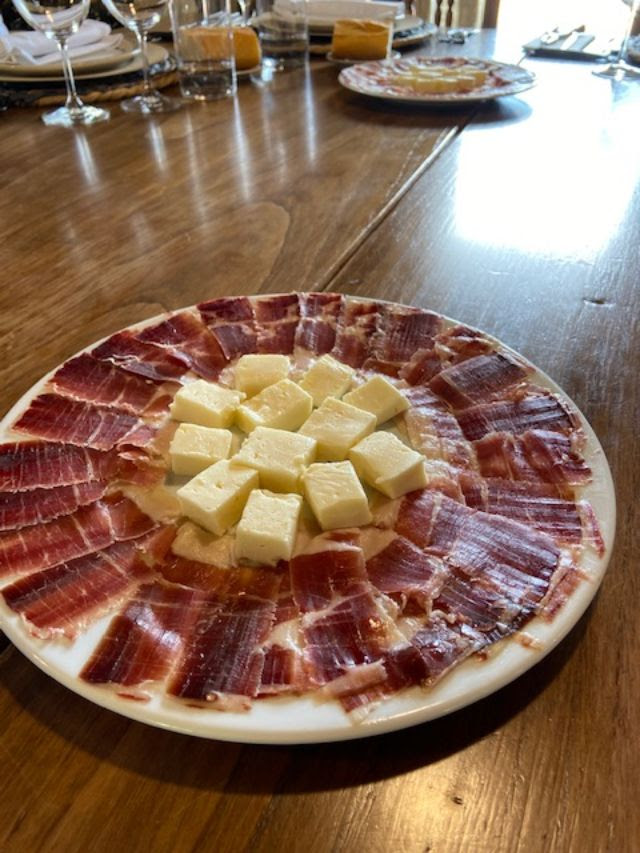 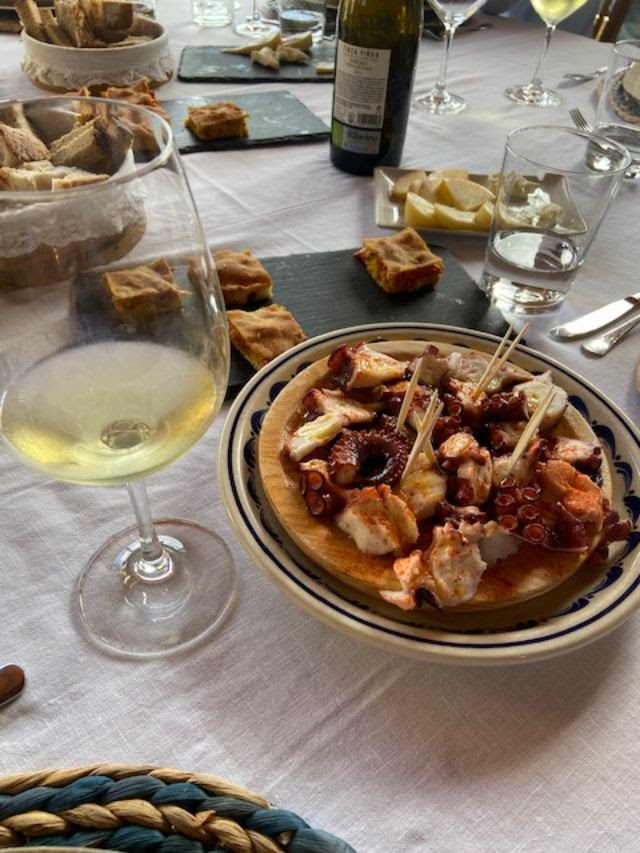 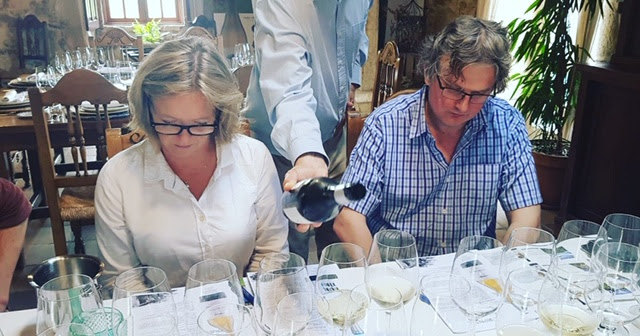 Our last stop was in Rias Baixas, not too far from the Mino river and Portugal at Quinta de Couselo an Albarino specialist. The vineyard setting was wonderful. We had a walk through the pergola-trained vineyards.A visit to the barrel room was followed by another comparative tasting of Albarino, Albarino blends, some Godello whites and reds made from Mencia grapes in DO Monterrei. Some of the Mencia reds are really fab and this was another little wine lesson for me in what is mainly considered a white wine region. Another phenomenal lunch followed where we were totally spoiled with lobster, prawns, jamon iberico and some gorgeous desserts. 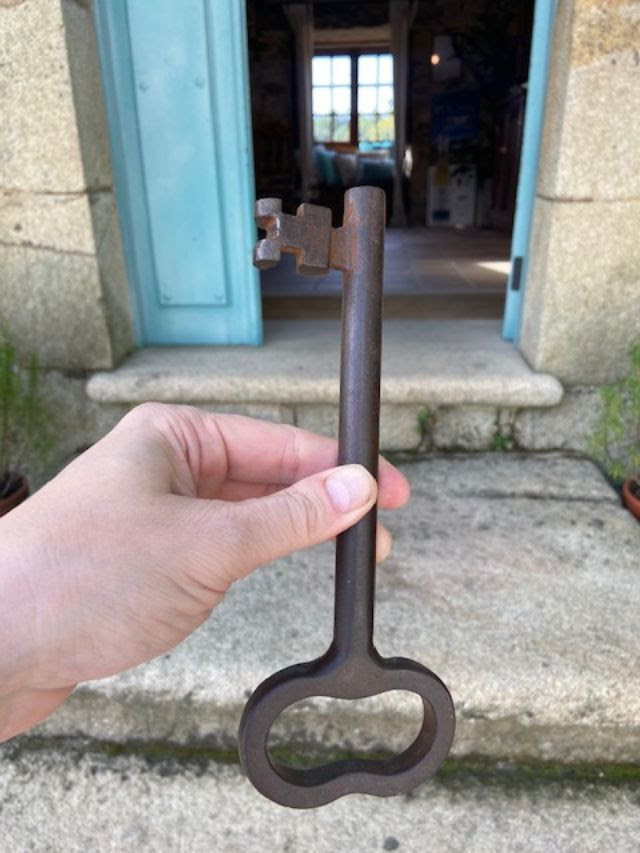